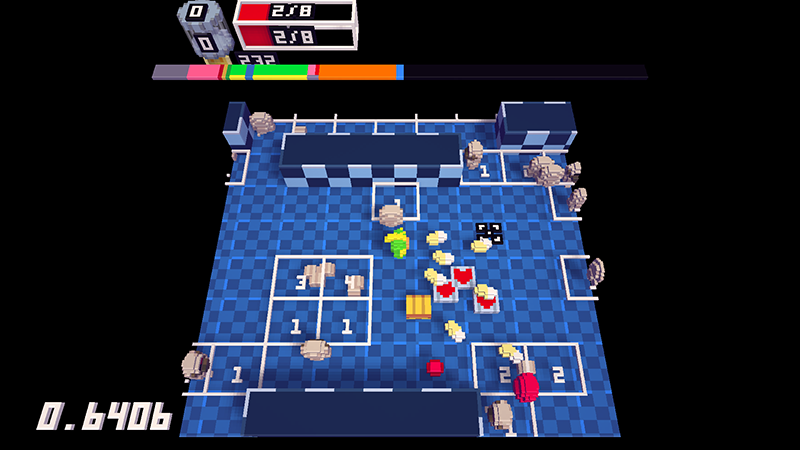 Nuclear Voxathrone is a project in progress done in Voxatron mostly driven by my love for the game (as in most of my projects) Nuclear Throne. Voxatron is a particular fantasy console as it’s the first one to be designed with voxel displays in mind instead of screens. I already imagined how Nuclear Throne would run in 3D, had plans for low-poly models but never went through this project at all.

Nuclear Throne is a top-down twin-stick shooter developped by Vlambeer where a bunch of mutants fight through hordes of enemies and many different environments to reach the mysterious Nuclear Throne in hopes of change and rest after surviving in a post-apolyptical barren world. It bears many elements from the roguelike games, being a roguelite like permadeath, random level generation and loot, while sticking to some shoot-em-up inspirations by having situations where bullets can’t be counted by how frantic the situations can become.

Voxatron being the parent project of Pico-8, it also has a limitation on the amount of processing done per frame, limiting greatly the possibilities of having hundreds of enemies or bullets in the game. The first focus of the programming sessions for this project once the basic mechanims were implmented was to make everything fit Voxatron’s limitations while still being able to have Nuclear Throne’s love for bullet hell. This implied quite a lot of testing and reimplementing. Here’s a few items of refactoring or redesign:

Read about other projects
← N.A.P.A.L.M. Transhumance →