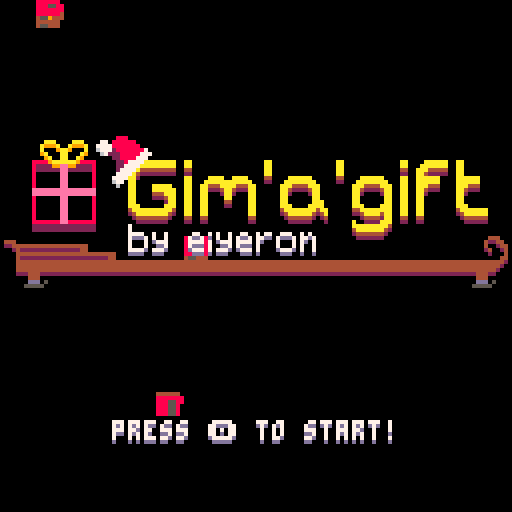 Gim’a’gift is a Pico-8 game done for the Advent Calendar 2018. It’s a shoot-em-up game where the player controls Santa and must shoot down alien who stole presents to deliver them to the houses. Inspired by the 1983 arcade game Xevious, the player can either shoot the aliens or drop gifts once they gathered enough presents to make a gift, which are shown behind Santa.

The game borrows a few tricks like hijacking the player’s input for the tutorial screen and the fake-voxel style by layering sprites. Such technique was made popular by NIUM as seen here. I also enjoyed making the enemy wave system. Each wave is comprised of a few enemies following a specific path. The wave actually manages the enemy’s lifetime and position contrary to the classic “entity-transform-components” structure found in game engines like Unity. This made handling groups way easier and opened the way for sadly cut down features like actual levels or wave cleared bonus like Gradius had.