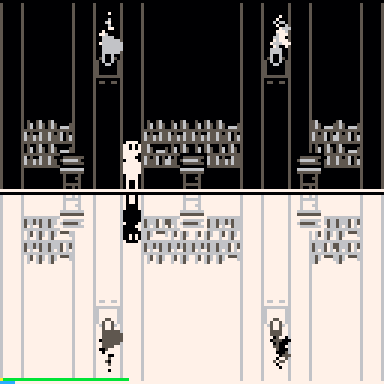 BW was a project done in Pico-8 driven by a story. I couldn’t make a story that was that interesting. I broke a lot of my usual habits with this game. It was a project driven by the story rather the gameplay, it was a game not using physics or collisions at all.

I tried at one point to use this project to express the story ideas I had in the previous project, Prelude. Except than setting the player directly in the weird dimension, I tried to give a bit more context and made the character went through their relative’s house before. Once again, I couldn’t make something interesting story-wise, thus this project fell into the eternally-paused limbo.

Nevertheless, it’s still one of my favorite works. I really like the art style I was going for (minimal, inspired of ZX Spectrum’s limitations) and the reflect effect shown in the first version still haunts me sometimes… I reused the character’s for my submission to the Meditation Games event, Empty.

I also tried to port the game to Love2D. You can check the code in the GitHub repository and run with Love2D 0.10.2. After a while this version of the projects was used as a sandbox for various experiments: - A better error screen showing a traceback with local variables - Color palette experiments using the HSLuv colorspace I ported to Haxe (and ended up having made the reference implementation).

Read about other projects
Fight for the Mike! →